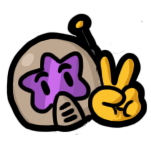 -A TRUE COLLECT-A-THON ADVENTURE-
Explore giant colorful worlds while completing quests to obtain Golden Souls! You can fully explore the maps at your own pace, and even experience completed missions again!

--NEW SUIT, NEW ABILITIES!--
Doomguy's got a plethora of new abilities to overcome any kind of dangerous situation and travel through unusual lands:
He can climb ledges, wall jump and even long jump now!
With all these abilities combined, you can easily dash through levels like a pro!

--AN ADVENTURE TAILOR-MADE FOR YOU--

Experience Golden Souls 3 with tons of different settings and difficulties!

Yes, that's right, unless you play on Hard, there'll be no instant death pits!

--THE NEW CHECKPOINT SYSTEM--
Many checkpoints are scattered across the map, walking into a checkpoint flag will automatically save the game, and also act as a respawn point if you fall into a pit (Unless you are playing on Hard, where pits are instantly lethal)

You can also disable the autosave in the options of the mod.

This mod is NOT standalone, DOOM2.wad and Gzdoom are required to play! 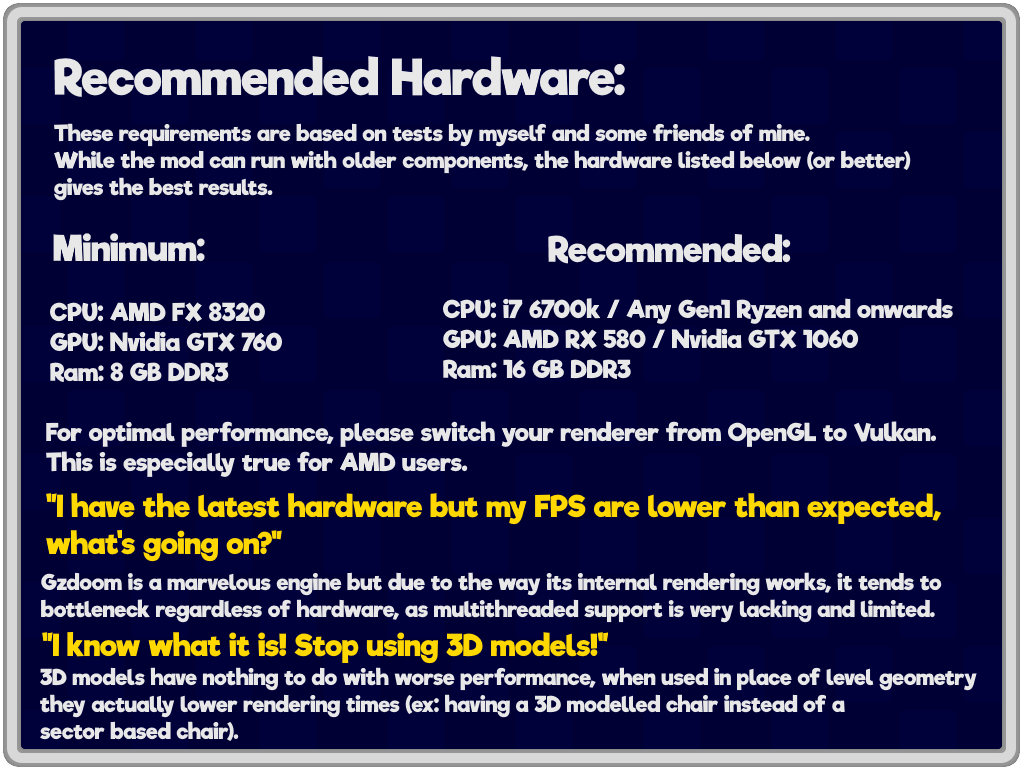 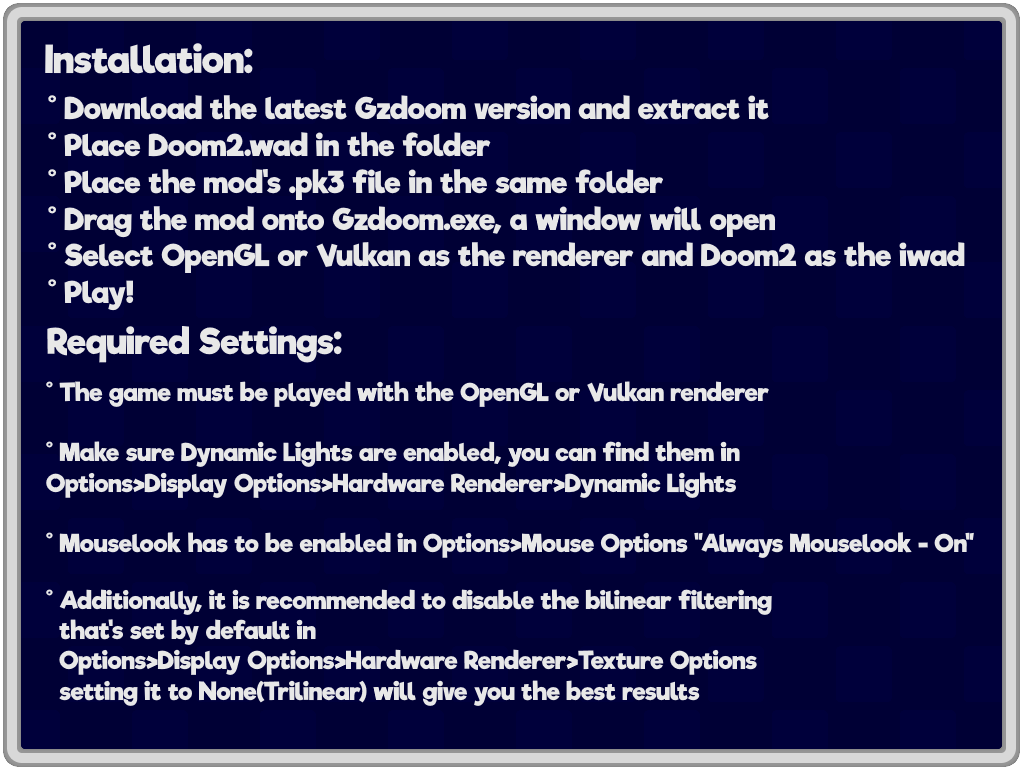 how do i disable 3d models?

well i can only play it at 10 fps or windowed

I am sorry that it's not running as good as it should be, please check the minimum and recommended specs to see if your computer is up for the task, try running it in Vulkan instead of OpenGL, disable the additional lighting effects in Options/Golden Souls 3 options.

This looks FANTASTIC. From the screenshots, anyway. I can't seem to get the long jump down! I'm stuck on the tutorial! Anyway, I'm really looking forward to the full release

Hey there Batandy! I just wanted to say I absolutely ADORE your work, thank you for all that you do!

When is the full version coming out?

I've been playing Demo2-hotfix2, and I had a great time with it.

The weapons are good stuff, I liked the tracers on the automatic rifle shots because they let you know how much spread the gun has. The Trumpet Launcher's projectiles seem to be much faster than in Golden Souls 2, which is a very nice change.
As for visuals and atmosphere, what can i say, it seems to only ever get better in the Golden Souls series. Which means a lot. I noticed loads of really nice looking 3D models. Many of the music tracks are comfy to the point of making me sentimental, and you made Doomguy downright precious.
But the action in your mod gets the adrenaline pumping as well. I had some quite frantic fights in Serenity Shrine's lava castle. The long jump and wall jump make the game more interesting and varied, and getting armour from gibbed enemies is a really cool addition. Non-lethal pits were honestly such a good choice, they let me be much more daring with exploration and I almost never quicksave anymore.
There were a few oddities concerning the progression inside levels, weapon behaviour and movement though. I wonder if it would be possible for me to talk to you about these mechanics in more detail. This is all very interesting to me as I'm trying to get into the game design field in general.

Regardless, I'm really happy that you're making this mod. Thanks, and best of luck to you!

Thank you! Yeah please do explain the oddities you're talking about, I take all feedback in consideration.

While going through the starting tutorial room, I read the sign saying that you can press jump and crouch at the same time for the long jump. But I still had to hold crouch for a very short moment to "activate" the long jump (0.3 seconds or so). This may not seem like a big deal, and I may only feel that this is strange since I was trying to long jump like in Half Life (where it's instant). But his resulted in me holding crouch for even longer to make sure I wouldn't mess up, and having to slow myself down annoyed me. I think it would be better to make the delay as small as possible, or even take it out completely. But maybe there is another reason for the mini-delay?

Concerning the weapon behaviour I noticed that vaulting over a ledge cancels all other actions/animations, such as reloading and charging a shot. This was strange to me because normally you're not allowed to switch away from the blaster without firing the shot you just charged, or switch away from the over-under shotgun before automatically reloading after firing both shells. It's useful for saving blaster ammo, but it seems unintended.

Now for the level progression. After exploring Windmill Acres i had 5 out of 6 souls, but couldn't get into the caco tower. Searching around for a way in did me no good, so i begrudgingly left the level and found out that I simply had to enter it again to progress, through the last mission option. This was unintuitive to me since I was able to find the first 5 souls without starting another mission. But I understand that it was probably designed like this because the last mission repopulates the level with cacos to fight before getting to the tower.
Something similar happened in Serenity Shrine. I explored the whole level, but still had to re-enter through the specific mission options in order for Wantopus to spawn the soul and open the gate. I get that this is probably a good way to give players some pointers for where to go. But it makes me feel like exploring the level on my own is pointless since I'm forced to let the game lead me to these secrets again anyway before I can collect them. Maybe there could be some sort of way to include Wantopus leading the way in the "first" mission? Or better yet, let the player collect the secrets on their own and have Wantopus as a backup plan if they don't find it by themselves?

Trying to explain these thoughts in written form is probably not ideal, but I hope they are understandable nonetheless. I look forward to your opinion on them, so until then.

Alright, thank you very much.

To answer the first point, I'm aware of that, in fact wrote an updated version of the tutorial that better explained that you have to crouch first and then jump, but for some reason it reverted to the old one (I probably forgot to replace the graphic while publishing hotfix version 2)

That said the actual tutorial of the game will better explain the long jump and also provide a proper learning curve for the player so that once they reach the first level they're already comfortable with the action, it's very comfortable to use it's just that, I didn't do a proper job of explaining it in the demo and it's my fault for that.
And yes not having a small delay did generate some issues especially when longjumping in narrow spaces.

I could update the demo but to be fair my dev version and the demo version differ so much now that it would be a pain to go back and fix some of the bugs that I noticed (including that the last soul in Serenity Shrine doesn't despawn if you exit the level without collecting it, which is kind of a big bug but it's already fixed in dev version).

Second point, it wasn't intended at first but I don't mind it so it's there, I have no interest in fixing something that doesn't really affect the experience, if anything it might be useful for speedrunners and people that wanna do specific runs and might wanna exploit some of the mechanics, I'm all for that.

I understand the confusion about the last point, which is why if you collect a golden soul in the level it tells you the exact number of souls you can still collect, if there's any, that's a clear indicator of how much stuff there is in the level from the mission you selected. Unfortunately I can't make it so the level automatically transitions to the stages that actually change elements as it would be a real nightmare for me to implement dynamically, not only that but some future stages will also probably change the layout per mission and that would be an absolute nightmare to seamlessly transition, so I guess i'm taking the old fashioned SM64 route where for some missions you will have to re-enter the stage.

Yeah, if the long jump delay is there to prevent other issues then it's of course a good thing.

And the vaulting animation cancel doesn't happen much during combat, so like you said, it's not a big problem.

Now that you mentioned that golden soul indicator, I remember seeing it after collecting each soul, but at the time I just wanted to keep playing and quickly clicked it away. Then I briefly thought "Hey, did that just say 4/5? Earlier I read that the level has 6 souls." Apparently I just didn't get the hint right, and then assumed I had misread the counter.
Can't wait to check out those changing level layouts, sounds quite interesting!

It's nice to get a bit of insight into these aspects. Smooth sailing to you.

Probably the game, hell, the software project I am most excited about. Good Luck and Have fun as they say!

This is exactly what DOOM 3 should have been. Shame on iD from 2004.

True, but then we wouldn't have gotten that fantastic movie!

I absolutely adored Golden Souls 2, and while I'm really looking forward to this one, I don't want to spoil my full experience later on by playing the demo now.

But, you know, I wanted to give some words of encouragement. :P 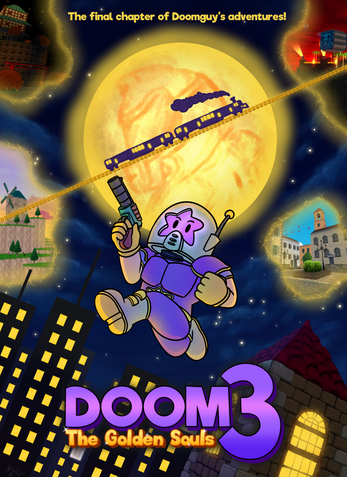 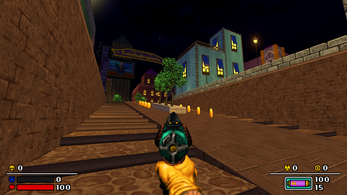 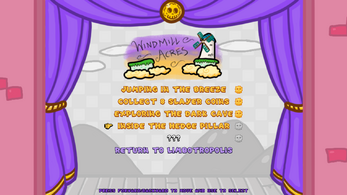 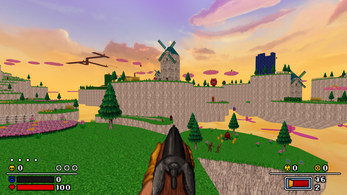 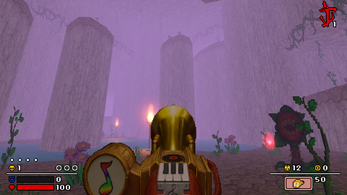 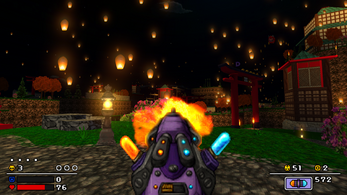